Rapunzel, let down your hair. 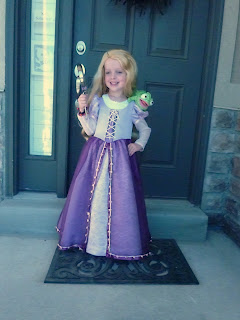 Someone was very pleased with their Halloween costume.
And it's about stinkin' time!
This costume was, well, much more involved than I had anticipated. It was the dress that I worked on, cried over, ran to the store for even more supplies and never seemed to get any closer to being complete.
The pattern was okay. The fabric could have been worse. But man, I put so many hours in at the machine on this one. At one point, late one night (or early one morning) I found myself weeping into a wad of violet satin and wondering just what I had gotten myself into. Not quite in the fetal position, but almost. Nothing is worse than feeling like you're not making progress.
So, yes, it's over. It did get finished. And I feel like a new woman.
Someone call me around September of 2012 and warn me to not make another costume, EVER.
The construction details can be found here.
*She loves it though. When people said, "Wow, you look pretty," she would say, "I know." If only we were all that confident!﻿
Posted by Hollie

So adorable Hollie! Mallory would love it! Miss you!!

It looked AMAZING! Great work. NOw that it's over, it was worth it right?:)

Oh I am so sad I missed Miss Rapunzel on my doorstep! That dress is ADORABLE, Hollie! You really make me wish I had some talent. Our costumes were "stitched" with duct tape this year... :) You're amazing!

She was the prettiest of the four Rapunzels in her class! :)

You are so talented, I think she looks incredible!! Hope your doing good, was so fun to have everyone here for the reunion

Just discovered your blog! Now I really understand your email address. That dress is amazing, I didn't realize you made it!!! I'm dumbfounded. and now I'm going to look at everything A wears and wonder if you made it. I've always thought she had such cute clothes!!!