You know how I said I never craft for my boys? That was a lie. This post proves it. Or proves how crafty my husband is. You decide.
G man turned 8 this week. To say he loves Legos is a huge understatement. HUGE understatement! So a Lego themed party was in order.
Okay, don't tell anyone but this is actually the second Lego party he's had in his lifetime. Shhh..... I needed to get more mileage out of the Lego shaped ice cube trays! They are available for loan by the way.....
I bought invitations and stickers (for the favor bags) from Acorn Designs on etsy. This was such a fun and easy way to go. I highly recommend it. Now for my rant:
I do not recommend buying any of the party supplies from Lego.com........bad experience. I received opened packages with only part of the quantity I ordered the day before the party. Apparently 5-7 day shipping means 2-3 weeks. After 3 hours on the phone with customer service, they made it right- but really? After I had already had to make other plans because my package sat in a warehouse forever, I get to go through prompt after prompt and be put on hold only to FINALLY talk to a representative (who was very nice by the way) who had no power do do anything but say sorry? I should mention, I initially sent an email about my package after several failed attempts to contact customer service and got an automated response about how much they care about my business. Nothing more, ever. End of rant.
We played a game of "Pin the Sword on the Mini Figure Pirate," drawn by my husband. We also played a game of "guess how many Lego bricks are in this jar." 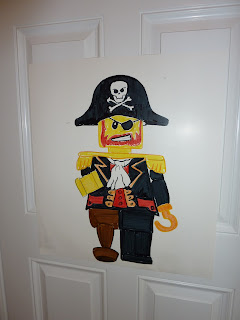 Next, a brick shaped pinata, also crafted by my husband. 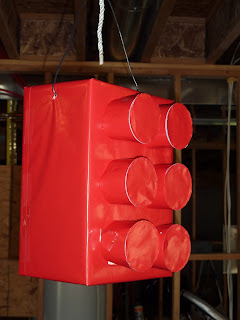 A cake, made by me, that I'm sure will end up on Cake Wrecks. The frosting, oh the frosting! Why does frosting hate me!?! At least the color was right, even if the consistency was so very wrong! 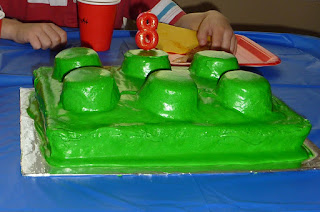 Next, my two favorite pieces, that none of the little boys even appreciated, for shame!
I attached a green base plate to a wooden picture frame with a picture of the birthday boy inside. My husband cut the base plate to the shape of the frame for me, but it was my idea. I'm thinking a few of these would make cute play room decor.
Second, the bunting. Card stock rectangles and squares with die cut circles attached to them with 3D glue dots to resemble bricks. I used this idea in the first Lego party for the invitations. Super easy, and the kids knew what they were even if the grown ups did not. 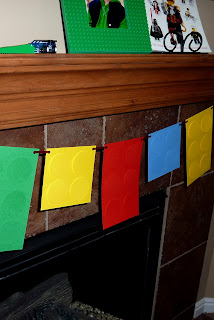 Overall, despite my problems with Lego.com and because my husband is so handy with all things crafty, it was really cute and fun. G and friends had a great time.
Posted by Hollie

What a fun idea!! You & Brent are very talented. Glad G had a fun birthday party. We just got back for Lego-land, it's a fun place to visit with little boys, and we had yot's and yot's of fun at Yego-yand(as Colton says) Hope you are doing good.

Look at you! So cute and creative! I love the pinata, the cake is DARLING and the picture frame idea is brilliant! You are right - those would be so cute in the playroom... I might just have to borrow your idea. :)Sounds like the party was a big hit. I'm glad he had a fun day!