When I was a kid, my mom always made sure there was plenty of eyelet lace and red wrapping paper with tiny white hearts for all 4 girls to make proper Valentines Day mailboxes for school. I'm not sure what my brother did, but I'm sure it was fantastic with as artistic as he is, but I really don't recall. I was always so proud that my mom let us use wrapping paper instead of construction or butcher paper. I think that's probably where my vanity began.....

Now, as the mother of 2 elementary school boys, non graded projects like the Valentines mailboxes excite me to no end. My boys, well, they couldn't care less. Unless of course my plans (which they would have loved in preschool) make them look ridiculous in front of their friends, then suddenly they have an opinion.

So here are our mailboxes for your viewing pleasure:

This year's addition was inspired by these, but made "more manly" by making an angrier, man eating version. Nothing says romance like flesh eating fish. We covered our box with felt, I stitched the fins while S stuffed them and hot glued them on. I was thinking craft foam would have been a cool covering (smooth like shark skin) but REALLY didn't want to make a craft project completely unbearable for an almost 10 year old by a trip to the store. This box took us about 30 minutes to make, and that was pushing his interest level. But he really likes it. It's a bit on the small side, but he will definitely be the only kid in his class with a shark-esque mailbox. 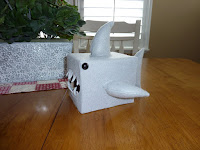 And here is one made in 2007. It took me so long to make that I make sure it reappears each year among our Valentines decor. Maybe it's because I made it the night before the party, in the wee hours of the morning while feeding a two week old Miss A- but whatever. Maybe it's because S had no opinion other than it needed to be Sponge Bob. Maybe it's because after Sponge Bob had his limbs ripped from his body, I lovingly restored him. Maybe it's because I'm lazy and hope that one of the boys will want to use it again sometime. S has used it twice and G hasn't needed a mailbox yet. G's teachers have the kids make them at school- a conspiracy to squelch the creativity of over achieving mothers such as myself no doubt ;) 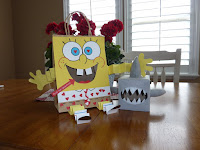 Are you noticing a theme? Square. Lives in the sea.
Posted by Hollie

Email ThisBlogThis!Share to TwitterShare to FacebookShare to Pinterest
Labels: crafts

Alright, hands down you have the Mommy of the Year award! Those are adorable and your kids are so lucky to have such a creative, talented mom! I could never make anything close to that cute! Ever!