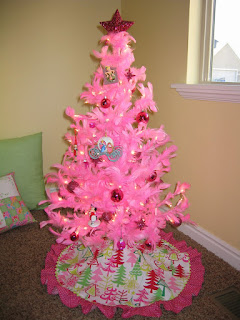 Miss A's tree is pink. So pink in fact, that even as a person who likes pink, it's too pink for me. She loves it. It makes her squeal with delight. I have found her pulling feathers from the branches and putting them in her hair, or sometimes just petting it. She rearranges it's branches and ornaments at least twice a day. Even though my rule for the kid's trees* is "one new ornament a year and anything handmade," she insisted on getting other pink glittery items for it at the store today. I agreed thinking it would keep her occupied for longer than two seconds (which it did) and knowing that buying glittery things is far less messy than making anything with glitter. Also, she didn't like how I tried to repurpose her magic wand for the star on top and a tutu (which she won't wear) for the tree skirt. The small purchase made her day, and even though it looks like we've had a visit from Interior Designer Barbie, I'm happy that's she's happy. The second the boys got home from school she wanted them to see her "bootiful tree."
I made the tree skirt from a single layer if Michael Miller Yule Trees and a hot pink Pimatex dot for the ruffle. I put some lime green rick rack along the top of the ruffle to make it less pink, if that's even possible. I had grand visions of quilting the skirt, but am glad I kept it simple from a time management perspective and also from a "I may be sick of this by the end of the season" perspective. Overall, I like the tree skirt and think it would look great on a green tree. Maybe after Miss A has finished pulling all of the feathers off on this one I can see what that would look like.
*The kids have their own small trees. It keeps them from playing with the real one. It keeps me from being completely OCD with the Christmas decor.
** The tree is from Micheal's a few years ago. The branches are sort of weird because they swivel around the trunk, which makes it easy to store but a real bugger to keep the branches in place. They all tend to wander toward the middle front.
Posted by Hollie

That is one pink tree!! At least it keeps her from playing with your real one. We have a small one that Sophie hugs, cause apparently she loves it. Kids are so funny!
Oh, and I LOVE the outfit posted right before this one. I should learn to sew.

I love it! I know I'm only a few weeks into this GIRL thing but is there really such a thing as to much pink? I can just invision her decorating it.:) She is so funny.

Would you think less of me if I told you that I "secretly" want a tree like this for myself? Maybe to put next to my bed... and Dan can have a manly, camo tree by his side of the bed.