Halloween was full of surprises for our family. First, the weather was beautiful. Such a nice and happy surprise after the snow and cold (really, really windy, bitter cold) that we've had here all week. Second surprise was that every seems to be on the mend. All of the kids have not felt well this week, missing school and feeling miserable. Both boys were so disappointed to miss the school Halloween party. So disappointed! It was also an unhappy mother moment for me to see how sad they were.
We were well enough to get dressed up and go trick or treating. The boys had been fever free for 24 hours and were aching to get out of the house. I was excited for them to burn off some energy. The boys filled their bags and will be happily hipped up on sugar for the next few days. It was very nice to have a relaxed and kicked back holiday. I'm glad that the kids got the full effect of Halloween, and are no longer disappointed that we didn't attend every single event that we could have.

Not so surprising however is that Miss A wouldn't wear her cape. I knew it would happen. She wore it when it got cold, but not for long. I tried to prepare her for her role by reading lots of Red Riding Hood stories, but still she could not be convinced. Her Bitty Baby; who she has named Baby Doll- not to be confused with Baby and Pink Baby, happily wore hers. G has always had difficulty when it comes to choosing a costume. Always. This year was no different. First he wanted to be Harry Potter. Next, he wanted to chose something from our supply of costumes. And finally, he wanted to be a robot. Not just any robot, like a box with aluminum foil, but one with working gears and armor. I asked him to draw me a picture, and it was well beyond my creative abilities. We searching the Internet looking for something close, and came upon a C3PO costume. He was in love, so we ordered it. When it arrived, he said, "Let's get working on the modifications." What modifications? "The ones to make it look like my drawing." Sigh. Again he was disappointed by my inability to deliver what he wanted. But working gears? Really? Who does that? And don't send me links of people who do. 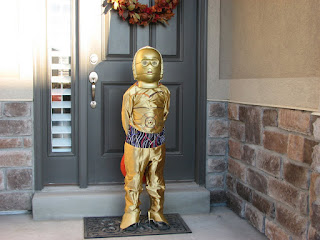 S as always, was pretty easy to please. He loved his costume and the wand that makes noises. He told me that next time he gets glasses he wants perfectly round ones exactly like Harry Potter.
Geez, long post. I have to show you our pumpkins. Miss A wasn't so into the pumpkin thing. It was more of a male bonding experience. Which with pumpkin goo is totally understandable. Here is side one of S's pumpkin. It's Phineas. 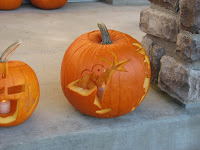 And side 2, Ferb. S's black widow pumpkin is in the background. 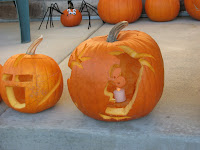 And G's Bionicle pumpkin is on the right, with my two very simple creations to the left. 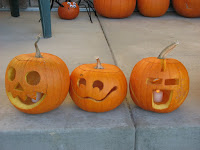 I'm so glad you guys were able to go trick or treating, I hope everyone is feeling better. The costumes all look great. G's is hillarious and if there is anyone who could figure out how to make moveing parts it would be you!

You are such an amazing mother to make the costumes!! They all looked great. Glad you are all feeling better and got to go out on Halloween night. We missed you at the shower. Take care and hopefully we will see you on the 21st!!

Hi! You don't know me, but I saw your review on the pattern you used to make the doll cape. I have that pattern and it mentions on the envelope that it contains the knitting pattern for the little red sweater but I can't find it in my envelope! Did you get it? I haven't completely unfolded all of the tissue pieces yet, but the sweater pattern isn't on the instruction sheets.