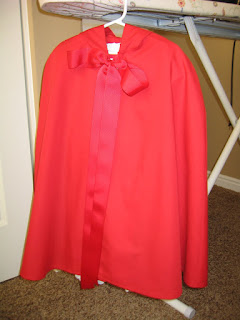 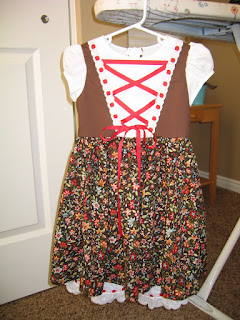 Excuse the pictures taken with the help of the ironing board. Miss A, as of yesterday, won't put the dress on. She very politely says, "No 'ank you" and then runs and puts on a toy army helmet. I made her try it on for size a couple of days ago, and she cried the entire time. I hope she changes her mind by Halloween.
It's Red Riding Hood if you couldn't tell from the pictures. If she won't wear the cape then I guess she'll be a peasant girl, Gretel or some other fairy tale character. But right now, even getting her to wear the dress is a challenge. So she might be dressed as a 2 year old with too many opinions.
Pattern: Simplicity 2571 view B. I was pleasantly surprised at the correct sizing on this one, but it was rather long. I cut almost 4" off of the skirt and pantaloons to get them to fall at mid calf. But I would much rather have it be too long than too short.
Fabric: Really cheap and poor quality broadcloth from Joann and Walmart. But it's a costume that she won't wear, so I like to think that I was inspired to not spend a lot of money on this one.
Posted by Hollie

I love it! Oh I hope she will ware it.