So, Miss A loves Cinderella. At first I was resistant, because really, she's two. We have plenty of time for her to be obsessed..but now that I'm trying to pack, I've welcomed it all with open arms. I even made her a dress. She loves to wear it and a pair of glass "zlippers" that are at least 3 sizes too big. Today, she put them on and packed a purse full of Legos and stood by the door saying, "S-go Mom, c'mon mom." I'm not sure where she wanted to go, at least she was prepared for any Lego disaster.
Her love for "Cinderella-la" may have come from my sister Megan. For a couple of years Megan has been impersonating Cinderella at parties and such. Megan had an appointment tonight at a local elementary school's literacy night, and asked G to come along dressed as Prince Charming. Why do we have a Prince Charming costume? The reason is two fold, #1 I apparently have too much time on my hands and #2 S spent several years attending princess themed dress up parties and we found that sending him as a pirate (specifically Captain Hook) was not such a great idea. Apparently little girls don't like to be told to walk the plank... Since the costume now fits G, he got to participate. He wouldn't have done it for anyone but Megan. At first when he was asked to go he said, "Will there be a table I can hide under?" Tonight before getting in Megan's car he made me look up and down the street to make sure none of his friends would see him. He did like spending the time with Megan, and it was worth being a little embarrassed to earn a candy bar. Megan mentioned that he spoke with an English accent while there. Too funny... 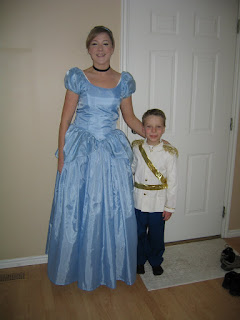 When Megan walked into our house, Miss A immediately looked down at her own clothes and gasped. She ran up to her room and put on her own princess dress. After comparing glass slippers, and twirling a bit, Megan had to get home before her coach turned back into a pumpkin. My kids are so blessed to have an Aunt like Megan.
Also, if I wasn't supposed to be packing I would totally sew these. I'm a little bit bummed that I may not have time to sew an Easter dress for Miss A, but I'd sure like to try. Liesl's patterns are brilliant!I know I've said it a million times, but really they are like nothing else out there.

I love that he spoke in an English accent and I'm glad Miss A was prepared for lego disasters. You guys make me laugh. Good luck with the packing

You can never have too many Legos in your purse. What smart girl Miss A is :)
I had so much fun with your kids last night. I created a lot of memories with them in just one night... I keep thinking about the accent and Miss A's reaction to my Cinderella dress... and I keep laughing. What cute kiddos.. they don't come much cuter than yours. I love you guys.
p.s. Don't move. :D

I want to hear this English accent of his. He is so funny - what a trooper to go as Prince Chraming. And you can NEVER carry enough Lego's in your purse as far as I'm concerned.