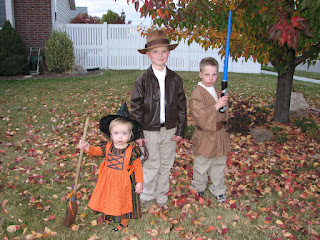 Just a few little notes about Halloween night. Miss A wore her hat (which took me longer to make than any other part of her costume) just long enough to take pictures. I consider that a great victory. My mom and I spent several hours wearing the hat to try to convince her how cool it is. S experienced a real to life Indiana Jones injury. S and Grandpa stepped outside to practice cracking the whip and came back inside seconds later with a six inch welt on S's back. Thanks to Grandma and a bag of frozen peas he is feeling better. And it just wouldn't be Halloween without someone getting ill. G complained that his stomach hurt during dinner. I (being the excellent mother I am) told him to eat his vegetables all gone or we wouldn't go trick or treating. About an hour later he was throwing up vegetables on our neighbors lawn. Sorry neighbors!
Now the boring sewing details:
Indiana Jones jacket is made from a home dec pleather material. I used Kwik Sew 3136, with some changes and a lot of quiet swearing. The pattern itself wasn't bad, the fabric was awful. It can't be washed or ironed. It was thick (but thin enough for a whip injury), slightly stretchy and permanently displayed all of my mistakes. The awesome hat is from Zurchers and the whip is from buycostumes.com. I also tried a downloadable pattern with my first attempt at making the jacket. Good idea in theory, but good heavens, after the 40th page printed with all the pieces but the ones I needed I was not happy. And then to think I would have had to tape or glue the 40 sheets of paper together to make full pattern pieces! Putting the pattern together would have been more difficult than making the actual jacket. So glad I bagged that idea. I contacted sewingpatterns.com and they sent me a new free pattern and removed the stupid downloadable one from their site.
The jedi is a Simplicity 0578 which is out of print. I made shoe covers to look like boots, but he wouldn't wear them. It's probably better since I don't know if they would have been washable. He had a duel with several of the neighborhood Darth Vader's before getting sick. He told a friend I was sewing him a mechanical hand like Luke Skywalker's. He was disappointed that I couldn't find a pattern.
The cute witch is Butterick 4054. I had grand visions of bloomers and a petticoat peeking out from under the skirt (a far cry from the simple costume I planned earlier) but decided to simplify since getting clothes on a wiggly toddler is not so fun. I added the ribbon detail on the pinafore to make it look more "storybookish." Over all the pattern wasn't too bad. It fit okay, and for a costume I thought the bagginess of the cut was okay. I made a matching dress and hat for dolly too. I thought maybe if the doll was wearing a hat Miss A would too. So much for simplification.The hat is Simplicity 2786 but I used bias binding on the brim to cover the raw edge and omitted the ribbon ties since that would have given Miss A one more thing to hate about the hat. Onesie and tights are from Gymboree and shoes are Puddle Jumpers. I would have loved to get these shoes, but my practicality won out. Brent will laugh at that statement.
Posted by Hollie

Hollie, every Halloween you out do yourself! I mean my gosh those costumes are to die for! Way to go! Could I have you show me how to make a pillowcase? That's as good as it gets for me!

They are looked great. And don't worry Garrett, Veggies make me throw up too. Hope Spencers welt is getting better.

Wow those costumes are amazing! You are so great at sewing!! I can't even sew a button on??

I've had quite a few instances of "I don't care if your tummy hurts. Eat the food," only to have Kenzie throwing up later. Then I feel bad, but I still make her eat her food.
I love their costumes. I was looking for your Halloween post just so I could check out the costumes. They turned out great!

A girl can never have too many pairs of shoes. AND, I think that I'm starting to increast Cooper's shoe collection as well. I adore all your costumes. I had fun sewing costumes this year, but don't think I"ll ever do it again. Well...never say never. Right?

That is a great picture of your kids! Both of your boys look so handsome... I can't get over the facial expressions. :) And Miss A is aloof that what's going on... Her dress really turned out so cute. Well done!