I've always liked dolls. I secretly wanted an American Girl doll as a teenager. I would have never admitted it at the time! I was a little jealous of my younger sisters for having been born at a time when it was acceptable to play with them. And the thought of books that tell their stories, it couldn't have been more up my alley! My mom bought a pattern for one of the original AG doll's (Samantha) wardrobes years ago. I bought the rest of them on eBay more recently ( love eBay for that reason). I'm slowly working on them. They are amazingly difficult for such small things, but they are very fun to make. I hope I relax enough to actually let Miss A play with them someday.
I did have My Friend Mandy, Becky and Jenny as a girl. My mom made a lot of clothes for them. She also made a lot of Cabbage Patch Kid clothing. It's amazing to me how much she did sew when I was young, even though if you asked her she'd say she didn't. She got quite a lot accomplished considering all 5 children. Easter dresses, Halloween and dance costumes seemed to be her speciality. I have really fond memories associated with the things she made. I wouldn't have been able to learn to sew without her closet full of fabric and free reign over the sewing supplies that I had as a kid. She let me make a lot of crap. Amazingly she always acted excited about the junk I made. 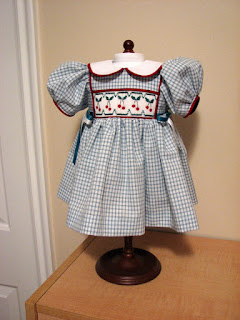 I made this doll dress several years ago, before having an actual female child of my own to sew for. I made it during my "heirloom sewing" phase (said like I'm some sort of artist or something-ha!). There are so few boy things to make. I made a lot of dress ups/costumes and pajamas for my boys before Miss A was born, but never really felt fulfilled in that. There's just something about making an item that gets used often. My oldest child wore nothing but costumes (and actually lived in the land of make believe) from about the ages of 2 1/2 to 6. We often had to let him wear a costume in the car on the way to church and remove it before entering the building. My second child has never been much of a costume wearer. He lives in the land of reality only, and is very literal about everything.

The patterns and fabric that I was longing to create with were so feminine. I took a couple of "heirloom sewing" classes and loved learning the techniques. The patterns are usually well designed and written. I love that there is as much care taken on how the interior of the clothing looks as the exterior. I also love the great fabrics and details that heirloom sewing incorporates. I love the hand work, smocking and embroidery. I don't always like that every item I make looks like it is from another century. I find it difficult to make items that are timeless, and not just dated. I made a linen suit for my oldest once. It may have gone over well in the south in the early 1900's, just not now and especially where we live. Brent was very relieved that S never had to wear it in public. It is in my flickr group for memories sake. It will have to remain there.

I've always hurd the stories about mom sewing but the only memories I have are of the night before a dance, and her adding sleeves to my Prom dress. I wish I would have payed more attention to your sewing lessions as a girl , then I wouldn't have to buy my kids Halloween Costumes. You are so talented!

Hollie, seriously that dress is adorable! You're amazing!

Love the American Girl stuff! My girls really, really want one. But I'm too cheap. Plus, coops will probably just color on them or something! I LOVE that dress! I am debating weither to make the kids' costumes this year. I feel very crafty lately! Any good ideas??

Michaels has great AG look a like dolls. And you can use your 40% off coupon. It makes them $15 or something. Maybe cheaper. I can't remember.

I love your dress. I am not sure if I read it correct that you do not smock for your daughter? For a more modern look you might try Australian Smocking and Embroidery (AS&E). I love to smock for my daughter although most people where I live have never seen it before unless they are over 65.